Welcome to Perfume and Aftershave website, where we research the products giving you interesting facts about Chanel No5 perfume. We also test the Chanel No5 to give you our honest opinion on how it worked and was it worth the money you are about to invest. This Chanel perfume is part of a huge collection of perfumes from the Chanel fragrance Labs which I’m sure will wet your appetite for more. 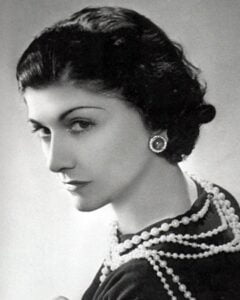 Coco Chanel ( Gabrielle Bouheur Chanel) was born on the 19th August 1883 in Saumur, Maine-et-Loire, France and died on the 10th January 1971.

Chanel started living with nuns at the age of 12 and for the 6 years that she lived with them she was brought up in a very strict environment. In the convent orphanage, Aubazine, in the Nouvelle-Aquitaine.

The path that led her to morning prayers was labeled in 5’s hence where No5 came from. On leaving school Coco learned to sew as a seamstress for 6 years and at night, was a singer at cafe-concert in La Rotonde. Where some say that’s when the name Coco was established.

In 1910 the french fashion designer opened her first boutique (rented premises) at 21 Rue Cambon called Chanel Modes and by 1927 owned 5 premises on the Rue Cambon.  Although there were accusations of collusion with the Germans during occupation of France. I feel it was probably true but this lady was a survivor and would do anything to be one.

After his obligatory two years of military service in France, he returned to Moscow in 1902. Where he started his perfumery training at Rallet under the guidance of their technical director, A. Lemercier.

He finished his perfumery education in 1907, earned a promotion to senior perfumer, and was elected to the board of directors.

In 1912 Russia celebrated the centennial of the Battle of Borodino, the turning point in Napoleon’s Russian ambitions. For this celebration Ernest Beaux created the fragrance “Bouquet de Napoleon,” a floral Eau de Cologne, for Rallet.

This fragrance is not to be confused with a fragrance from Brocard, Rallet’s chief competitor in Russia called “The Empress’s Favorite Bouquet”, which later evolved into the Soviet version, “Red Moscow.”

Bouquet de Catherine was not a marketing success, perhaps due to Catherine the Great’s German heritage at a time of rising tensions between Russia and Germany which would lead, in 1914, to World War I.

While born and raised in Russia, Ernest Beaux’s French heritage brought him into the French army.

While it was generally expected that this war would last no more than a few months. He was not released from military service until 1919. And having by this time seen service in the infantry fighting against Germany.

Then as an intelligence officer and interrogator at an Allied prison camp at the Kola Peninsula at the Murmansk Oblast during the Russian Civil War.

While serving in the French military, Ernest Beaux’s perfumer colleagues at Rallet fled during Russia’s October Revolution to La Bocca, France, to continue working with Chiris.

In 1918 he was working as a counter-intelligence officer on the Anglo/French concentration camp of Mudyug island. Where he was interrogating Bolsheviks captured by the White Russian and Allied armies.

Ernest Beaux, In 1919 released now from the army, settled in Paris but continued to have a relationship with the former Rallet employees at La Boca. He created Chanel No5 in 1921.

Chanel No 5 is one of those perfumes that you really need to test before you buy. The reason for this is, it can smell great in the bottle but once you apply it can change scent completely as it all depends on your skin type.

We tried it and it was great for us, classy and clean fragrance of Ylang-Ylang then Lily of the valley and finally a woody scent. So be warned try before you buy!!

Reasons to consider when purchasing your perfume

Which is really a false saving because you will over time use twice the amount of the fake product for it to smell for the same time period as the original.

Choose your perfume on whether you are purchasing the product for evening wear or office wear. As you really don’t want to be going to work smelling as if your ready to party the evening away.

Perfume do smell differently on other people, the reason for this is the reaction of the ingredients to your individual skin type. We are all different and the fragrance will not differ much but the difference is there.

Once you have purchased your product, where do you store it?.

Well most people will put their perfume in the bathroom or on their bedside cabinet by the window, but this couldn’t be worse for your perfume.

Perfumes hate direct sunshine and damp places like a typical bathroom. So my advice would be to store it in a dark corner of your bedroom and it will last as long as the manufacturer specifications.

I hope this article helped you, in making your decision easier on whether to purchase this Chanel No5. Also, what I have written in this article is my honest opinion on this perfume. I can guarantee you now, that I have no affiliation to Chanel in any way.

All comments are welcome so please leave them at the bottom of this page also this website will be updated with new articles to advice you on past and present Perfumes and Aftershaves also please follow me on this website.